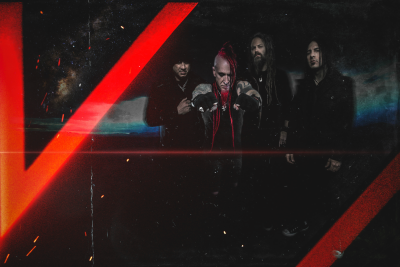 “We all felt Vinnie’s presence and energy in the studio,” Maxwell confirms. “His spirit was definitely there, and it gave us the fire to finish Welcome Homein the way we felt was right and also honorable to him. Chad’s vocals and lyrics speak volumes too –he really dug deep on this one.”In addition to the nine cuts Vinnie played on, an extra song, “Skyy and Water,” was added. “I wrote the music the day after Vinnie died,” Maxwell reveals. “It’s a very bitter, emotionally draining piece for me. I wanted the sorrow and loss I was feeling to come out in the music, and Chad’s lyrics said exactlywhat I was feeling. The first time I heard them, it broke me in half. That song is our heartfelt ‘Goodbye and Thank You’ note to Vinnie.”“My biggest regret is him not being with us to hear the finished album,” Tom concludes. “I can picture it now: Vinnie Paul cruising down Las Vegas Boulevard in his Escalade, cranking Welcome Hometo 11 with that famous smile on his face.”

HELLYEAHunleashed “333,” the first fiery song from Welcome Home,on March 14,2019. The official video surpassed 590,000 YouTube views in less than three weeks.On May 11, 2019, the band performed live at the Las Vegas House of Blues to celebrate Vinnie Paul’s legendary life and game-changing legacy.The nightmarked the first time the band has taken the stage sincePaul’s passing, and the debut of StoneSourmemberRoy Mayorgaas fill-in. In a poignant moment during the set, Las Vegas Review-Journalcolumnist John Kats (Katsilometes) presented the band with an official proclamation from the Clark County Board of Commissioners declaring May 11,2019, as “VinniePaulDay,” for his incomparable role as a musician, and helping make the entertainment industry in the Cityof Las Vegas what it is today.A portion of the proceeds from the sold-out show were donated to theAmericanHeart Association(AHA)in honor ofVinniePaul.The worldwide release date for Welcome Homeis set for September 27, 2019.An 18-city headlining summer outing will kick off on Tuesday, July 23, in Atlanta, and will culminate in a special hometown celebration on Saturday, August 17, in Dallas, Texas. Full routing and tickets available onwww.hellyeahband.com.In honor of Vinnie, HELLYEAH isdonating a portion of ticket sales from their upcoming tour in his memory, in hopes of raising over$10,000 for AHA. As Kyle Sanders so succinctly stated: “While Vinnie Paul is obviously irreplaceable, one thing we can’t not do is tour. As easy as it would be to say we’re not going on the road, we have to. Vinnie would be extremely disappointed in us if we didn’t promote this record properly. He’d be pissed off at all of us for putting all this work into finishing the record and then just letting it sit there on the shelf while we put a couple of songs to radio and whatever...andwe know that.”