THE MUSIC OF CREAM 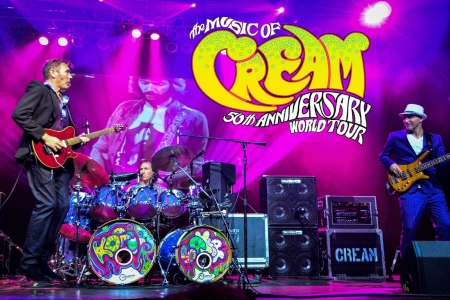 Cream was a chemical explosion like no other, the blueprint for every supergroup to follow and the heavy blues precursor to Hendrix, Zeppelin and so much more. Fifty years since their earth-shaking debut album, the bloodlines of that hallowed trilogy come together to pay tribute to Cream's legendary four-album reign over the psychedelic frontier of the late 1960s. Kofi BAKER (son of Ginger) and Malcolm BRUCE (son of Jack) unite with Will JOHNS (Eric's nephew by Marriage and son of Zeppelin/ Stones/ Hendrix engineer Andy) to unleash the lightning that electrified a generation. Feel the fire and the freedom of "Spoonful", "Strange Brew", "Sunshine of Your Love", "White Room", "Crossroads" and "Badge" — performed by master musicians whose lives have been steeped in the Cream spirit and legacy.

EXPERIENCE a Once-In-a-lifetime concert salute to the most innovative and explosive supergroup of all time, in the hands of those that knew them best.

WATCH as they interplay live with their fathers on the big screen; classic moments in rock history brought back to life.

LISTEN as they share personal insights and stories, complete with rare, yet to be seen family footage and photographs.