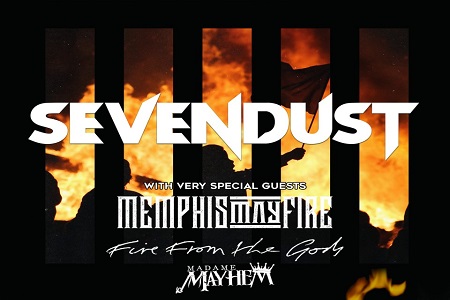 You don’t have to change everything. However, realigning can be the healthiest remedy after nearly two decades in the music business. Going into their eleventh full-length album, Kill The Flaw [7 Bros. Records/ADA Label Services], Sevendust changed a lot around them regarding the infrastructure of their organization, but they didn’t alter what matters the most—the music. Following their first significant break (two months) since forming, the Atlanta group—Lajon Witherspoon [lead vocals], Clint lowery [lead guitar, backing vocals], John Connolly [rhythm guitar, backing vocals], Vince Hornsby [bass], and Morgan Rose [drums]—entered their new creative hub, Architekt Studios in Butler, New Jersey, completely inspired and invigorated.

“For the first time in our careers, the avenues were swept off with all of the trash we had on them before,” admits Lajon. “We didn’t have certain people’s hands in our pockets or helicoptering the situation to what they thought it should be. We took a lot of things in our own control. As a result, it’s a new chapter for us.”

“That’s why the record is called Kill The Flaw,” explains Clint. “It’s basically about cutting off the baggage from your life and career and trimming down the excess that holds you back. We’ve had a lot of struggles with the industry. We changed everything about our business. It’s a rebirth in a sense, as far as what we want to do, how we’re going to do it, and who we’re going to it with. We’ve learned from our mistakes.”

There were a few other significant changes as well. Instead of holing up in a hotel, Lajon, Clint, and John rented a house together. The sessions became “24-hour” as the guys cooked breakfast together, hit the gym, and then locked themselves in the studio until midnight every day for five weeks. They also penned the music alongside one another in the studio, jamming everything out in the same room.

“It made everything feel like it did when we first started,” smiles Lajon. “We went in, sat down, looked at each other, picked up the instruments, and began rocking out. Recording like an actual group gave everything more substance.”

“I wanted to embrace what Sevendust is,” declares Clint. “It’s the contrast of the melodic vocal over a very percussive, heavy musical landscape. That’s what we’ve always done. That’s one of those things our fan base really connected to. They’re our life’s blood. There’s no question. We allow our fans to have more of a voice than other bands. We love putting out records that people can say, ‘This what they do. This is the type of band I want to support.’”

The first single and album opener “Thank You” upholds the pillars of their signature style with a buoyant guitar groove, bombastic drums, and soulfully striking refrain. “There’s always someone trying to keep you down,” sighs Lajon. “At the end of the day, that negativity makes you stronger. You’re still going. It says, ‘Thank you for putting me down. Thank you for making me work harder. Thank you for hating!’”

Meanwhile, “Death Dance” builds from an eerie clean guitar into a towering distorted verse that’s as robust as it is raw. Everything converges on an undeniable vocal chant during the chorus. “That’s the summer dance jam right there,” chuckles Lajon.

“It’s based around the social media era we’re in with all of its vanity and ego,” reveals Clint. “We all get caught up in it. People try to enhance their looks without putting any energy towards giving back. The dead are society staring at their iPhones. You’ve got to see the world. You can’t look at a screen for that.”

Then, there’s “Not Today,” which is equally stirring and soaring with its six-string beatdown and vulnerably vibrant vocals. “That’s another one about change,” continues Clint. “It’s us as a band basically making a choice to change who we work with and how we do what we do. It’s us addressing things that have stopped that from happening. You’re lashing out at someone and explaining how you’re going to be a different version of yourself.”

Thankfully, they’re still Sevendust through and through, and that’s what forged one of hard rock’s most diehard audiences. 2014’s acoustic offering Time Traveler’s & Bonfires saw an overwhelming response from that community, being quickly funded through a highly successful PledgeMusic campaign. Just a year prior, Black Out The Sun entered Billboard’s Top Hard Music Albums chart at #1 and landed at #18 on the Top 200. They kicked off their illustrious career with an untouchable string of three gold albums, beginning with their self-titled 1997 debut and continuing with Home in 1999 and Animosity in 2001. Along the way, they’ve sold out shows everywhere and given unforgettable performances at the likes of Rock On The Range, Woodstock, OZZfest, and Shiprocked! to name a few. However, the new chapter starts now.

“I hope people know we’re the real deal,” concludes Lajon. “That’s the most important thing. There’s substance here. That’s why everybody keeps coming back, and we’re beyond thankful for that.”

“I want everybody to walk away surprised,” Clint leaves off. “I hope it’s better than they imagined, and they get this reassurance that we’re all connected. We want to give people fresh, quality music. I hope they feel prideful they’ve stuck with us through all of these years.” — Rick Florino, July 2015