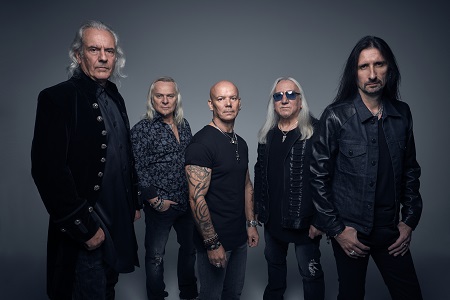 Among venerable UK rock institutions, with Black Sabbath and Jethro Tull dispersing, we are, perhaps, really, down to just Deep Purple, Yes and Uriah Heep left to uphold the tradition of quality original progressive hard rock forged at the very beginning of a golden era for this music, late ‘60s into the nexus year that was 1970.

At that crossroads, along with Led Zeppelin, Black Sabbath and Deep Purple, Uriah Heep helped invent a decorative and uniquely British form of heavy metal with their debut album, Very ‘Eavy, Very ‘Umble, offered as a self-titled on American shores, but whatever the titling, historically massive in the invention of a music format that would rule the ‘70s and only intensify in the ‘80s.

It is from those roots, with classic, crucial slabs of nascent metal such as “Gypsy,” “Bird of Prey” and “Walking in Your Shadow,” that Uriah Heep began their ascendance both at home and in the US, culminating in their most enduring works, Demons and Wizards, The Magician’s Birthday and Sweet Freedom, all of which went gold in the states and entered the Billboard Top 40.

Uriah Heep have been responsible for the most elevated and intelligent use of vocals in a heavy metal context amongst the major bands inventing the genre in the 1970s. It is for this reason Heep were coined the Beach Boys of Heavy Metal, and their influence is there for all to see in other bands including ‘Queen.’ They were also one of the forerunners of using the Hammond organ along with Micks signature wah wah guitar and this became the template for their sound.

Success has followed the forging of such an audacious formula. Across 25 studio albums, along with myriad live releases and compilations, Uriah Heep have managed to sell 40 million records worldwide, four million of those in the US. Impressive American numbers, but that leaves 36 million records to be sold in the rest of the world, underscoring the fact that Uriah Heep have become, through their relentless dedication to touring, a truly global band, with particular success in Germany, Scandinavia, Japan, Eastern Europe and Russia, where they were the first Western rock band to play live in Moscow in December 1987 to 180,000 people.

Through their success as Rock n’ Roll pioneers this enabled other bands to follow in their wake and Russia is now part of every bands touring schedule.

What is perhaps even more admirable than the love for the band across the globe has been the quality and consistency of the band’s music across a myriad of personnel changes, some of them potentially critical, beginning with the loss of charismatic vocalist David Byron after the band’s ninth studio album, High and Mighty, issued in June 1976.

Indeed, some of these personnel shuffles might have been responsible for a fallow period in the late ‘70s, the accepted nadir in the narrative being 1980’s Conquest record. But in 1982, the band stormed back (as they would again in 1995) with a classic of British heavy metal called Abominog, which entered the top 40 in the USA. This album featured Peter Goalby on vocals. and in the annals of Uriah Heep history, this record, a conquering document released smack in the thick of the New Wave of British Heavy Metal, is revered by Heep fans on par with such classics as 1971’s Look at Yourself and 1972’s Demons and Wizards, even if the band’s music had been overhauled and supercharged for a new decade. Similarly stadium-rocking records Head First, issued in 1983, and Equator, issued two years later, capped off this exciting era for the band.

As a way of contextualizing the band’s extensive history, the well regarded FM-friendly Peter Goalby years might be considered the third era of Heep’s extensive and productive history. As recap, one might frame the first era of the band as encompassing the classic David Byron years along with the productive co writing stewardship of Ken Hensley, culminating in 1973’s double Live album, sent to #37 on the US charts with the help of timeless Heep classics like “Sunrise,” “Sweet Lorraine,” “Circle of Hands, “epic masterwerk “July Morning” and smash hits “Easy Livin’” and “Love Machine,” both examples of the bands mastery of the heavy metal shuffle.

Following this, the second era of the band might be said to encompass the years 1974 to 1981. Although containing a few David Byron-fronted albums, this time period features underrated records like Firefly and Fallen Angel, along with 1977’s Innocent Victim, which sold over a million copies in Germany alone. Each of these featured ex-Lucifer Friend singer John Lawton on vocals, and each helped build and maintain the band’s legacy of intensely professional harmonies across songs rife with joyous and even spiritual melody.

Yet despite Uriah Heep’s esteemed place in rock history being assured through the likes of Demons and Wizards and The Magician’s Birthday alone, the most inspiring chapter of the Uriah Heep saga must surely be that of the band’s fourth era, marked by      keyboardist Phil Lanzon joining in 1986 followed by vocalist Bernie Shaw in 1987, both Phil and Bernie are still in the band to this day and the first recording with them both was a live album entitled ‘Live in Moscow,’ documenting being the first western rock band to be invited to play in Russia. This was followed by a studio album called Raging Silence which was the start of the Box/Lanzon writing partnership.

Indeed, given the massive commercial status of Uriah Heep in the ‘70s, along with considerable attention afforded the guys in the early ‘80s, it’s become a bit of an urban myth that this is a band plagued by lineup changes. The fact of the matter is, for over 30 years, from 1986 to 2007, Uriah Heep had consisted of patriarch Mick Box on lead guitars, Bernie Shaw on vocals, long-time member Lee Kerslake on drums, Trevor Bolder on bass and Phil Lanzon keyboards.

It is only with the retirement of Lee Kerslake through bad health and the death of Trevor Bolder that the band found it necessary to add new blood. Russell Gilbrook auditioned to become Heep’s drummer and he bought along the right measure of energy that they were looking for which gave the band a lift, and on that day he made the drum position his, adding a strong dynamic to the Heep sound. After the death of Trevor Bolder, Dave Rimmer came along and when he auditioned we quickly found that he was the missing piece of the jigsaw puzzle and we had our all important rhythm section.

And it hasn’t been that this 30-plus year “fourth phase” for the band has been any sort of victory lap. Admired and respected as fans have been for the consistency and high quality of the long-standing Uriah Heep lineup over these last three decades in the live environment, the band has also consistently put out excellent new music faithful to storied Heep trademarks such as heaviness, use of Hammond, the challenge of the shuffle, and the always essential use of wah-wah when Mick is inclined to tear off one of his life-affirming guitar solos.

Indeed, if through the 1990s, Uriah Heep had worked at a relaxed pace they’ve issued three albums of completely new music—Wake the Sleeper, Into the Wild and Outsider—with a fourth scheduled to be recorded in October of 2017. The run, however, really begins with the highly regarded Sea of Light from 1995, a fan favourite that finds the songwriting team of Box and Lanzon yielding huge creative returns. Up into 2014’s Outsider, on which the two co-write every song, the band were rewarded with a late-period hit in “One Minute,” a huge crowd-pleaser at all live shows across the globe.

And through all this rich history, in the wings—or as parallel story lines as it were—Uriah Heep have conducted a thriving “Official Bootleg Series” and they celebrated their 40th anniversary with a re-recordings album called Celebration, followed by a tour of 250 shows all over the world (60 different countries, in fact).

They’ve had ex-members die (most notably Gary Thain, David Byron, Trevor Bolder and recently Jon Wetton), although on a lighter note, they’ve had ex-members—Lee Kerslake and Bob Daisley—that at one time were fully half of the classic Ozzy Osbourne Blizzard of Oz band! Even earlier than that they had  Kiss, ZZ Top, Foreigner and Rush as support bands which gave those bands their first break.

The point of all this is that even now, nearly 50 years after the band’s inception, the sun seems to be shining down upon Mick Box and Uriah Heep, and Uriah Heep are one of only a small clutch of heritage acts that are doing everything a band must do to be considered vital, namely touring worldwide and regularly recording and releasing vital, high quality, exquisitely produced full-length records that continue to capture their fan base’s imagination. If there’s another band born in 1969 that has stayed as engaged with their fans as Heep, all the power to them. But for Mick Box, music has never been a competition—him an’ Heep will keep spreading their many messages of positivity all over the world and gaining new fans along the way. Their songs and music have stood the test of time and with even more new songs on the horizon the mighty ‘Heep’ are as strong and powerful as ever.