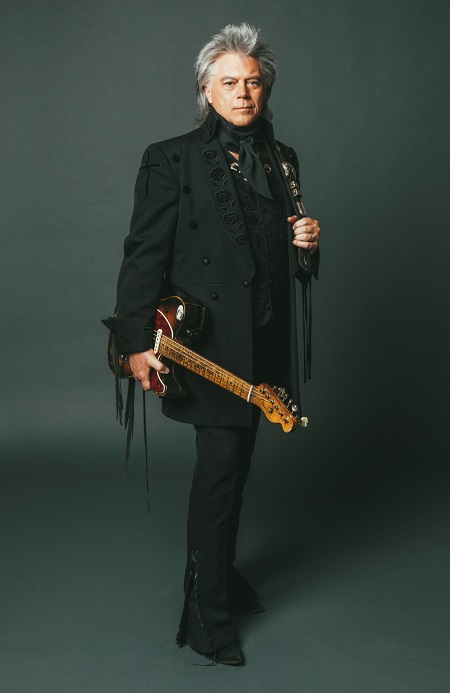 If you were to give country music an address, you might say it's at the corner of sacred and profane, two doors up from the blues and folk, and just across the street from gospel, R&B and rock 'n' roll. And on a deeper emotional and spiritual level, it resides where Saturday night meets Sunday morning.

No one understands these coordinates better than Marty Stuart. For over forty years, the five-time Grammy winning multi-instrumentalist, singer, songwriter, photographer and historian has been building a rich legacy at this very crossroads. On his latest release with his band The Fabulous Superlatives, the double-disc Saturday Night & Sunday Morning, Stuart captures all the authentic neon and stained-glass hues of country music – from love and sex to heartache and hardship to family and God – in twenty-three tracks.


“I've always thought that country music had a really unique relationship with gospel music,” Stuart says. “It is interesting to me that country stars can sing drinking and cheating songs authentically, then at some point during the evening or the broadcast, take their hats off and say, 'Friends, here's our gospel song.' If it’s the right messenger it seamlessly flows. That's a time-honored tradition, from Jimmie Rodgers to Hank Williams to Johnny Cash. Rogue prophets and rogue preachers. That is my world.

“Another part of my world, while growing up in Mississippi, was listening to our local radio station, WHOC. 'One thousands watts of pure pleasure.' In the morning, they signed on with country music and farm reports. At noon they played gospel music for an hour. Then afternoon was rock 'n' roll and top 40. Late afternoon was soul. And they signed off with easy listening. I thought everybody's radio station was like that. It was kind of a reflection of how Mississippi is. The birthplace of America's music. The church house is the common denominator, and every form of music has a touch of the blues. So I come from that perspective. Traditional country touched me the deepest, but all of these other styles were relevant to me. It felt like just another day at the office.”

That day at the office on Saturday Night and Sunday Morning offers a rousing blend of Stuart originals, classic covers and traditional hymns and that throw their arms around the whole history of not only country but modern American music. Kicking off with the revved-up rockabilly rush of “Jailhouse” and “Geraldine,” disc one winds through Stuart’s grand “When It Comes To Loving You” and the honky tonker “Talking To The Wall” through deeply soulful covers of Charlie Rich's “Life Has Its Little Ups And Downs” and George Jones' “Old Old House” before wrapping up with the positively frantic blues rocket ride of “Streamline.” Disc two trades sawdust for sermons, and goes right to the river with the gorgeous “Uncloudy Day,” featuring not only the legendary Mavis Staples on lead vocals, but Marty playing a guitar that the Staples family bequeathed him that once belonged to Pops Staples. The Fabulous Superlatives shine with their celebratory group harmony singing on standouts like “That Gospel Music,” “Angels Rock Me To Sleep” and “Mercy #1,” while uptempo rockers like “Keep On the Firing Line” and “Good News” build the service to a big hands-to-heaven call and response finish with “Cathedral,” featuring the mighty soul shouts of Pastor Evelyn Hubbard.

“There are a few twists and turns in the record,” Stuart says with a smile, “so I hope it all feels like it's part of the same thing. As a band, that's where we are. It's natural.”! Born in the small town of Philadelphia, Mississippi, Marty Stuart caught the music bug early, displaying prodigious talent on every stringed instrument he picked up. At an age when most kids are running bases in little league, 13-year old Stuart was logging cross-country interstate miles as a mandolinist with the legendary Lester Flatt's road band. In his twenties, Stuart toured with Johnny Cash, and also played with other legends such as Bill Monroe, Jerry Lee Lewis and Carl Perkins. By the late 1980s, Stuart was a solo artist, rising faster than mercury in the heat of a hillbilly fever. But amidst the hits and hoopla, the bright lights eventually revealed a deeper truth.

“I had such a great run, playing butt-wigglin' songs in coliseums, and it was just wearing thin,” he admits. “I remember spinning around one day at Foxwoods, up in Massachusetts, there was a full house, the band was really loud, we were doing good, the crowd was screaming and hollering, and I thought, 'I am not enjoying this music.' And then I told myself, 'Well get back to enjoying it, because you’re on top of the world right now. Platinum records, Grammys, it was all coming. But I did not like the way my legacy was shaping up. So I took the better part of a year to unwind it. Another issue that fueled that decision was that radio was starting to cool on my records. I was beginning to chase after hits, and it was tearing me apart. I had one record left on my contract with MCA, and I vowed to get back to the music I’ve always loved the most, and let my heart be the chart.'”

To get some clarity, Stuart consulted his friend and mentor, Johnny Cash. “I went to his house and said, 'J.R., I've got a record in my mind called The Pilgrim. I laid it out to him, and he said, 'Well, just know you're stepping up for rejection. Potentially.' I said, 'I understand, but I've got to do this.' He said, 'If you've got to do it, that's all the reason you need.' So I made the record. It was a great critical success, and it was a line-in-the-dirt artistic moment of reconnecting with my true self, a piece of myself that I had hidden away years before, to go exploring. From that moment forward, I realized that there's a different way to live a life as a musical citizen.”

Stuart knew he didn't want to travel this new path alone, so he recruited fellow musical missionaries Kenny Vaughan, Harry Stinson and Paul Martin.! “From the Superlatives' first rehearsal, I knew this was the band of a lifetime,” Stuart says. “I knew this was my Buckaroos, my Strangers, my Texas Troubadours - my legacy band. Kenny Vaughan, Harry Stinson and Paul Martin are not only musical geniuses, but statesmen. The Fabulous Superlatives are without question one of the greatest bands of our time. We have played ourselves out of the woods and Saturday Night and Sunday Morning is one of those milestone projects in the band’s legacy that truly brings the spunk and fire of the bandstand to the studio. The other person that should be mentioned is the invisible Superlative, Mick Conley. His engineering brings a touch of class and a spark to our music that any band would long for. We are a much better band because of Mick’s presence.”

With acclaimed albums like Ghost Train: The Studio B Sessions and Souls’ Chapel, as well as The Marty Stuart Show, a musical variety program on RFD-TV, Stuart says “I’ve found my place to drive a stake in the dirt, and proclaim, this is what I believe in.”

“I think traditional country music should be regarded alongside jazz and ballet and classical music in the pantheon of the arts,” he says. “I thought, 'As a band, that's our mission. Putting our arms around what's left of the culture. Making sure the old timers get loved on and shown dignity.' And then it became, let's show young musicians that traditional country music is alive and well. The message is, C'mon, over here and play it if it's in your heart. RFD-TV gave me a stage and a broadcast to put country music and Saturday night back together. Those two entities were made for each other. We’ve just finished our 156th episode of The Marty Stuart Show. It’s been pure magic.”

All of Stuart's immersion in authentic country music has also found creative expression through the lens of a camera. Inspired by the photographs of jazz drummer Milt Hinton of his fellow musicians, Stuart realized in the early 1970s that he could fill a similar role as a chronicler. And for decades, he's been capturing strikingly beautiful images of performers and fans that feel like little windows into the soul of our country.

A collection of his most resonant photos is currently on display in an exhibit called American Ballads at Nashville's Frist Museum (also a new coffee table book published by Vanderbilt University Press), and later this year, a second exhibit of his work called The Art of Country Music will open at the Sheldon Gallery in St. Louis.

Of his photography, Stuart says, “Whether it was the doorman at the Opry, or Ernest Tubb's bus driver, or stars or songwriters or musicians, everybody stood still for me and let me take pictures. I'd aim to capture what they all meant to me. It was basically like taking pictures of my family. It takes a tribe to raise a kid, and they were my tribe. All of those people invested something in me when I was a kid, and I wanted to remember that kindness. The thing aboutthat era of those old masters is that most of them were really country people. They were down to earth. Basically, farm people who'd come to town and got a job singing songs. That's what I related to, coming from Mississippi. The other side of it, I wanted to take pictures of my life on the road to send home to my family and they could see what I what I was up to. It was basically documenting family.

“Songwriting, photography, guitar playing, entertaining, singing, designing TV shows - it's all the same thing to me,” Stuart continues. “If I take a good photograph, it absolutely makes me do everything else better. If I play a good guitar solo, it absolutely affects how I take the next picture. It's all interwoven.”

With Saturday Night and Sunday Morning set for an autumn release, and more touring ahead for the Superlatives, Stuart says his expectations are high, but grounded in reality.

“I heard Aretha Franklin say something one time that I never forgot - 'When I do something new, I always wonder if people will like it, but I step forward, present it, close my eyes and stick out my hand and hope somebody takes it.' I thought that was a beautiful way to put it. I hope the new album is accepted. Starting with The Pilgrim forward, I chose a very different path, an unthinkable path, to tear down such a huge wall of success and go, 'That was wonderful, but I'm gonna do something different now.' And basically start over. I look back at what we've done with the Superlatives over the last twelve years, and I'm very proud of it. That legacy that I didn't see forming right that day at Foxwoods, I have a better feeling about it now. And as the old song says, ‘I do believe everything’s gonna be alright.’”