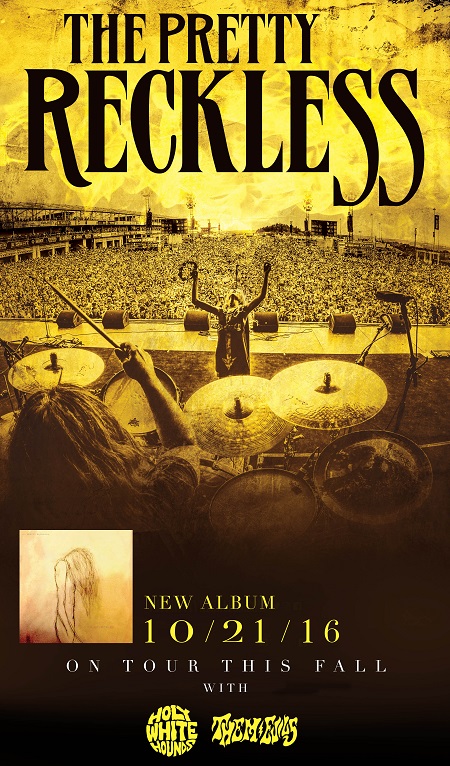 SPECIAL OFFER!!  A digital download of The Pretty Reckless’ forthcoming album, Who You Selling For, is included with every ticket you order for this show. You will receive an email with instructions on how to receive your download following your ticket purchase.


BAND BIO
Between 2013 and 2015, The Pretty Reckless traveled the globe touring in support of their second album, the raucous, roaring, Catholic guilt-inspired Going To Hell. A bruising blend of ferocious rock and roll and inky blues, the album debuted in the Top 5 on the Billboard Top 200 and spun off three No. 1 Mainstream Rock singles, “F*&ked Up World,” “Follow Me Down” and 2014’s most successful song at the format, “Heaven Knows,” which spent a total of 18 weeks in the top spot. Going to Hell’s success meant strong live demand for the New York City band, which is anchored by its songwriters, singer-guitarist Taylor Momsen and guitarist Ben Phillips, who have been making music together in partnership for ten years, and rounded out by bassist Mark Damon and drummer Jamie Perkins. The Going To Hell Tour sent The Pretty Reckless off on four separate jaunts across North America and three trips to Europe. Their explosive shows earned them legions of new fans at home and overseas.

Despite feeling physically and emotionally spent after returning from their two-year odyssey, Momsen and Phillips jumped right into writing the songs for their third album, the scorching yet soulful Who You Selling For, which will be released by Razor & Tie in October. “We had so much we wanted to say, it was like shaking a can of soda on tour, then when we started writing we cracked the seal,” says Momsen. “The touring life is very isolating. You look at the world through a bus or airplane window. But music is the healing factor. It’s the one thing that is grounding and a true companion through the forest. It saved us — again.”

The necessity of music as a balm for the soul is a theme that threads its way through Who You Selling For, which finds Momsen and Phillips dealing with emotions ranging from confusion and frustration to depression and despair. “I think we felt a dire need to express those thoughts,” says Phillips. “And they’re things I think most humans feel on a daily basis but don’t always have an outlet to express. In the end we’re saying, ‘Don’t give up, your soul is all you have, so you’ve got to hang onto that.’” The album’s opening track, “Hangman” (which was inspired by a poem by Chidiock Tichborne written on the eve of his execution), tells a story of having control over your own mind and soul no matter what is happening to you. From there, Who You Selling For delves deep into the psyche of Momsen and Phillips — two artists who believe very much in the fiery redemptive power of rock and roll.

The album’s first single, “Take Me Down,” is a story of desperation, with Momsen delivering such lyrics as “I spend all night and day / How much harder can I play? / You know I gave my life to rock and roll?” “It’s about wanting something so much you’d sell your soul for it,” Momsen says, adding that she and Phillips were inspired by blues artist Robert Johnson’s song “Crossroads,” which some have interpreted as Johnson singing about selling his soul to the Devil in exchange for his musical ability. “Back To The River” is about the desire to get away from everything, to go where no one can reach you, while the strutting “Wild City” is influenced by being young and on your own in New York (“We wrote it while walking down Rivington Street on the Lower East Side,” Momsen says). The most aggressive song on the album is “Oh My God,” which Momsen describes as “self-confession right out of a journal. I think it speaks for itself.” And finally “Who You Selling For” testifies to music being a form of salvation and describes how the rest of the album reaches into all forms of rock and roll looking for “The Answer.” The song inspired the album’s title, asking listeners to take a look at their own lives with its provocative query. “For me, it’s a question that challenges what I’m doing with my life,” Momsen says. “It questions the meaning of my actions whatever they are. It also defines the record in a grander way by asking the listener to look into the meaning of each song past the obvious.”

Sonically, Who You Selling For alternates between blistering hard rock (“Oh My God,” “Prisoner,” “Wild City,” “Living In The Storm”) and gentler, more downtempo moments (“The Walls Are Closing In,” “Take Me Down,” “Back To The River,” “Who You Selling For,” acoustic ballad “Bedroom Window,” and closing track “The Devil’s Back”), giving Momsen a platform to showcase the power and versatility of her voice. She is one of rock’s most compelling contemporary frontpersons, capable of being both brash and confrontational and sultry and seductive, daring listeners to ignore her at their own peril with a fiery swagger that has only grown more fascinating as Momsen gets older. (She was 15 when The Pretty Reckless wrote and recorded their rock-grunge-blues debut album Light Me Up, which was released in 2010.)

Momsen’s voice sounds all the more intimate thanks to the unvarnished way that she and Phillips, along with their long-time producer Kato Khandwala, recorded the songs. “It’s the most natural recording possible,” says Phillips. “It’s all performance-based, nothing was fixed. If Taylor walked in and sang the song and it didn’t work, she’d walk right out.” When more than just guitar, bass, and drums were needed, additional musicians were invited in, including guitarist Warren Haynes (Allman Brothers), guitarist Tommy Byrnes (Billy Joel), and keyboardist Andy Burton (Ian Hunter), as well as backing vocalists Janice Pendarvis (David Bowie), Jenny Douglas-Foote (P!nk), and Sophia Ramos (Rod Stewart).

“It was so great having that many musicians in a room playing together and just hitting the record button,” Momsen says. “It’s very gratifying to feel the players and singers represented as they are. It gave life to these songs that were written tucked away in a bedroom and it enabled us to really deliver the most honest performances possible. What you hear is what it sounded like, no frills. That’s it.”

It’s the band’s willingness to bare their souls that has earned them such a passionate fan base — people who identify with the raw candor of the lyrics and fearless way they are expressed. “I’ve had such a strange life,” Momsen says. “I’ve always felt on my own, running around the world on some mission that I barely understood. Our fans have been the ones who were really there for us. They have supported us through the good times and the bad. I owe them gratitude. They are the inspiration when things look too bleak to keep going. I know it’s been said a million times, but it’s true, I wouldn’t be here today without them. They make this all possible.”